Worried about the cell tower on your building roof? Read this…

Home Cell tower radiation Worried about the cell tower on your building roof? Read this…

Are you loosing your sleep over radiation risks from cell tower on your building roof? Concerned about being in high radiation area? Are you under significant risk from microwave radiation from these towers? Read more to know the answers..

By our own estimates, 50% of cell towers installed in our cities are illegal. In most cases, cell tower on your building roof do not adhere to construction norms. Moreover, they do not respect regulations set by TERM cells on cell tower radiation. Naturally, people are worried about radiation in their homes from antennas at close quarters and on their roofs. In this post, we will try to give you answers to a frequently asked question – How bad is it to have a cell phone tower on the roof?

Line of sight and shadow zone

You would have heard about “line of sight”. It refers to an object which is clearly visible, unimpeded by any physical barrier.

Have you heard of shadow zone? This refers to the area immediately under the base of a cell tower, which is not in direct line of sight. For most cases, having a cell phone tower on the roof of your building, will create a shadow zone immediately underneath it. We would try to explain this with a diagram.

Radiation risks from cell tower on your building roof

Cell phone towers propagate microwave radiation in certain patterns. They are called beams, and are based on line of sight. Therefore, the radiated power is concentrated on the direct line of sight. Refer to the image above for illustration.

If you have a cell phone antenna on the roof of your apartment, you are not under direct threat. The microwave beams are looking outwards and you are most probably in the shadow area for the tower. The beams that are “thrown” by the cell phone tower antennas are directed outwards from the premise. Only a small part of this radiation could be coming into the premise.

As mentioned above, there is relatively little risk or no risk for people who live under the tower from the microwave radiation. This in turn, actually increases the radiation emitted by the cell phones. In a low radiation environment (such as basement, elevator etc), the cell phone has to work harder to reach the cell site signals from the tower.

In fact, we routinely see cellphones radiate 20X-1000X higher than the human threshold limit (1mW/sq.m) – when these phones are in shadow (low network) zones.

You can know that you are in a network shadow zone – if you are cell phone disconnects too often, is “out of reach”, or the call is “unclear”.  In all likelihood, you will encounter such problems immediately beneath a cell phone tower.

If you are living in an apartment with cell phone towers on your roof – then the situation is likely to be even worse. On top of that, you will also not have a direct line of sight to the tower and your phone signal will be very low.

All the while you have been concerned about radiation from cell tower on your building roof – whereas the risk is actually from the cellphone. Starving the cellphone of network increases its radiation manifold – elevating the risks hugely.

Is it safe to stay close to a building with cell phone tower?

An earlier blog answer the question – Are cell phone towers really harmful? The answer is based on the “line of sight” and “shadow zone” principle. You could be staying close to building with roof mounted antennas. However, you could still be in the shadow area. It means you are safe from direct microwave radiation from the cell towers. On the contrary, your cell phone radiation could be a very big problem.

If you are in direct line of sight of these antennas at a distance less than 100-150 metre, there is a high risk of radiation at your home. Moreover, if there is a new born baby, toddler, a pregnant mother or disabled seniors at home – the degree of caution must be increased. In this case you should consider getting a premise radiation audit done to ascertain the radiation risk. 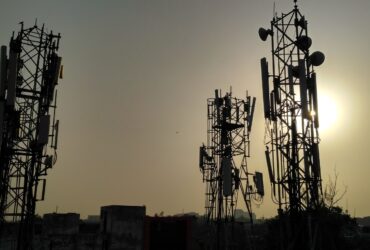